Chesapeake Bay, near Route 50 Bay Bridge and Sandy Point State Park.at last I have the ultimate excuse not to do the "Polar Bear Plunge" in January. It's not only crazy to jump into freezing cold water, it could be down right dangerous! Note the expression on the face of the man wearing the Red Baseball cap. He's still scared half out of his wits and glad to be alive! 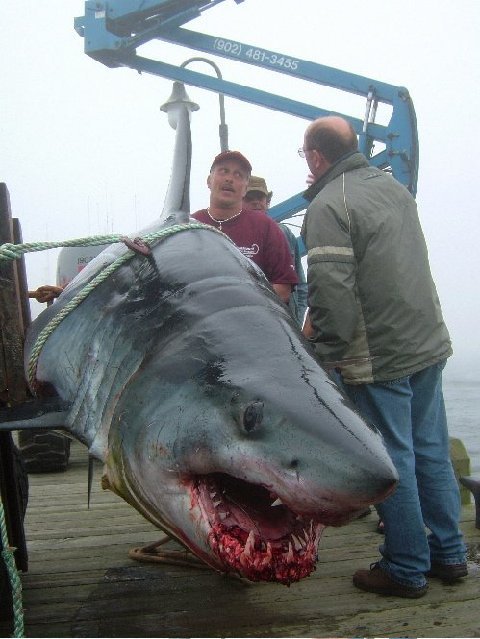 Annapolis MD
While the vessel 'Dawn Raider' out of M arklys Marina in Essex, Md. was fishing for Striped Bass (also locally known as Rock Fish), this Great White was hooked in the mouth but only resisted slightly for 15 minutes before it came up alongside t he boat to have a look; long enough for one of the crew members to slip a rope a round it's tail!!! 'And that's when things heated up!!
.. The Shark took off towing the 42 foot fishing boat backwards through the water at about 7 Knots. Just like in JAWS, the boat was taking on water over the stern and the crew watched in horror as the shark would actually jump completely out of the water at times. This went on for an hour before the shark finally drowned. She weighed in at 1035 LBS. It is suspected she followed a weak El Nino current into local waters in search of food. Although mid 60 degree water is considered ideal for these sharks, the larger ones can tolerate water in the low 50s. 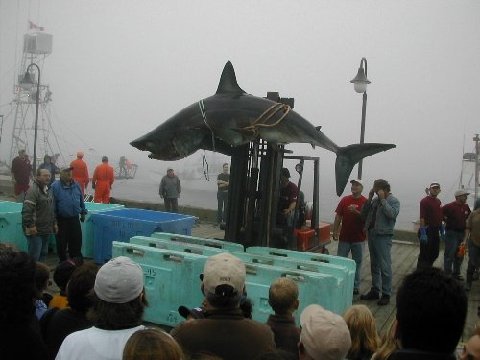 NOTE: THE TAIL FIN IS THE SIZE OF A MAN!